It’s been a year already.  Check out the recap of the 2018 West Coast CAM Challenge.

This past weekend San Diego was home to one of the coolest gatherings of muscle cars anywhere in the country as The Bad Boys of Autocross competed in the SCCA San Diego CAM Challenge.  Detroit’s muscle cars have been around for more than 50 years now and while they’ve always been known for big v8 engines and killer horsepower, its only recently they have been built with serious handling in mind.  As such, its exciting to see some of these cars that were never intended for serious cornering transformed into track monsters.  These CAM Challenges are an exciting addition to SCCA lineup of National events.

The San Diego CAM Challenge autocross  marked the first of three such events scheduled to take place this year.  Cal Club and San Diego Region both set records for CAM turn out earlier this year so its no surprise that over 50 competitors came to the Challenge to see who had the fastest Classic American Muscle cars of them all.  No where else last weekend, could you see this many muscle cars (with ages ranging from 52 years old to only months old) being raced competitively against each other!

Those of us lucky enough to live close enough to the SDR region already know that CAM class down here has created something very special.  The CAM-T drivers in SDR prove that great Camaraderie and good BBQ make the monthly races a can’t miss event.  Is it any wonder that SDR has the largest CAM-T class in the country with class sizes regularly in the 15-20 range?  In an effort to give all the out of town CAM drivers a taste of SDR style autocross, the local CAM-T drivers served everyone a FREE delicious home cooked Polla Asada lunch on Saturday. Bry Morris won the Rosco Racin’ Spirit of CAM Award.  As one of the key guys always willing to step up and help out fellow competitors and ensure the monthly BBQ happens this was a deserving win.

A preview of all the CAM cars of the 2017 San Diego CAM Challenge on Saturday is captured in this Hot Pits walk through video.

Saturday and Sunday of the CAM challenge are separate events with separate trophies and format but all using the same course.  On Saturday you run a heat in the morning followed by a heat in the afternoon.  Then, your best run from each heat is added together to form your total time.

CAM-T had the largest class of the entire combined Match Tour and CAM Challenge with 28 drivers.  Which means 8 trophy spots were up for grabs.  The weapon of choice was the Mustang which had 13 drivers, though it was about 50/50 between Ford and GM cars.  In addition to the typical Mustangs and Camaros there were two other notable vehicles.  First, the lone Mopar representative in the form of a 1966 Plymouth Barracuda and also a 1972 Ford Bronco.

CAM-T saw a lot of movement in the ranks throughout the day.  After the first heat the top 8 standings were:

The sold out Match tour / CAM Challenge dual event caused the day to run long and in round 2 everyone got only 2 runs.  In fact, CAM started their runs in about 10 minutes after official sundown and finished up in the dark.   Conditions were changing as track temps were cooling off and visibility was starting to worsen.  The final CAM-T runs had no impact on podium spots 1-3.  However, trophy spots 4-8 all moved a lot based on the final runs with the biggest gain in position coming from Mike Trenkle who was previously out of contention and jumped up 3 spots to secure the final trophy spot.  As a result of Mike and Danny Leetch’s strong final runs Tom Kamman was knocked out of the final trophy spot.

This was some tight racing with almost every spot separated by only a tenth of a second or two.  The tightest finish in CAM-T was between Richard Trujillo and Jenna Taylor with only 21 thousands of a second separating them.

The fastest CAM car of Saturday (by PAX) was the CAM-T car of Chad Ryker.  Ride along on his fastest run in this video.

With 16 drivers CAM-C had 5 trophy spots up for grabs. Heading into the event all eyes were on the rivalry between Greg Nelson and Jordan Priestley in their late model Camaros.

After the first heat, the top 5 standings were:

This was some close racing with only 3 thousands of a second separating Scott and Chris while Faraaz hung onto the last trophy spot by only 65 thousands of a second.  However, after the sun set and final runs were made the Camaro guys cleaned up and took the top three spots.

The closest finish in CAM-C was between Nick Sloan in his 2015 Mustang and Will Flores in his 2017 Camaro who were separated by 85 thousands.

With 9 entries CAM-S had 3 official trophy spots.  However, due to initially higher CAM-S entries 5 trophies and hats were awarded.  Entries dropped as at the last minute some of the CAM-S drivers decided to switch to AS.

After the first heat the top 3 standings were:

David had the fastest raw time of the CAM cars after the first heat and was a heavy favorite for the win by the Arizona crowd, while Gary Thomason was favored by the San Diego locals.

The closest racing in CAM-S was between Jason and David above with 64 thousands separating them.

Sunday was the CAM shootout.  Driver’s were given 3 runs to see if they would qualify for the shootout brackets.  The fastest 16 CAM-T, 8 CAM-C and 8 CAM-S drivers would qualify.  Afterwards, the drivers faced off in elimination brackets until one winner from each CAM class was declared.  However, it doesn’t end there.  The fastest driver from each class then faced of against each other to declare an overall CAM Shootout winner.  The PAX index was used to balance the classes for this final shootout.

Mary Pozzi won the CAM-T shootout, the full results are as follows: 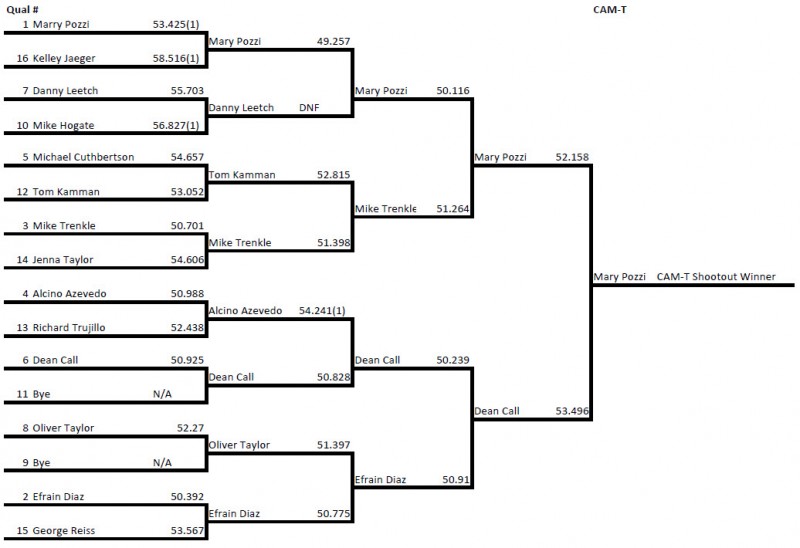 By the time CAM-C ran it was raining and Faraaz Zaman proved to be the man to beat in the wet and won the CAM-C shootout.  Though surprise surprise the closest bracket race of any CAM bracket was between Greg Nelson and Jordan Priestley with less than two tenths separating them.  Full CAM-C bracket results are as follows:

Jason Rhoades won the CAM-S shootout.  Currently I don’t have the complete bracket for CAM-S.

Jason Rhoades was also the overall CAM shootout winner!  Though it was a battle between Mary and Faraaz with Faraaz just edging out Mary by only 51 thousands to grab second overall.

Special Thanks to the CAM Challenge Sponsors